Cobb places great importance on understanding the requirements of their customers, who have in recent years faced higher feed prices, the trend towards antibiotic-free production and a demand for high quality meat.

With the continually improving Cobb genetics, the current broiler is robust with low mortality, excellent feed efficiency and high yield. This also applies to the broiler breeder, which the customer would like to see producing more and more chicks.

To maximise the genetic potential of your broiler breeders, management details are important. The foundation for high productivity is in rearing. To achieve peak production, prepare your pullets in optimal conditions for good persistency and low mortality later in lay.

Focus on uniformity, body conformation, bodyweight profiles and feed management to create the ideal preparation of the pullet. 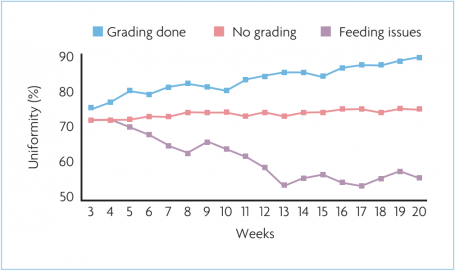 Fig. 1. Field results from uniformity curves by grading and no grading.

The goal for the end of rearing is to have a sexually uniform flock with the correct body conformation for age. With high sexual uniformity, birds increase production faster into lay. Feed and weight gain can also be better managed and there will be lower mortality in early lay.

Flocks that peak high (88-91%) are flocks that increase production fast in the first three weeks.

Production should increase from the first week, with a 1-3% weekly production increase rising to the second week by adding a zero. This means that 1% should go to minimum 10%, 2% to minimum 20% and 3% to minimum 30%.

From the second to third week the production should at least double. For example, 30% in the second week should become 60% in the third week.

In the first eight weeks skeleton uniformity is determined. In this period, the aim is to bring all chicks to the same frame size. High skeleton uniformity makes it easier to bring all birds to the correct body conformation after 12 weeks. Birds with a smaller frame in comparison with bigger frame birds get fleshed faster and often over fleshed on the same feed intake.

The first days for the chicks will influence how the uniformity will develop. Provide 50g feed/pullet before placement, and a floor temperature of at least 28 ̊C. 24 hours after placement, 95% of the crops should feel soft and pliable, indicating that the chicks have successfully located feed and water.

The second week after the chicks have reached their target weight they should start on controlled feeding to limit growth, which will lead to competitive behaviour.

There is also a difference in eating capacity between the chicks – some will eat faster than others. This influences the nutrient intake.

While in rearing, the uniformity should never decrease. To increase the uniformity it is strongly recommend to grade the birds at a young age. With grading, the birds will be split into smaller groups with the advantage of less competition for feed.

The first grading should be done at seven days – and certainly not later than three to four weeks. It is important to induce good immunity in the first weeks. If the birds are being placed in other houses as part of the grading process, you should consider the coccidiosis vaccine and take the correct actions in combination with the correct age.

Production results have been improved by grading the flock by weight at seven days.

The chicks should be sorted into three groups – light, standard and heavy. The standard group should be around 50%-60% of the flock.

It is essential that the different groups can be fed differently to manage them according to their bodyweights.

At eight weeks, 78% of skeleton is determined. The goal is to have all birds at that age on the same bodyweight. The advantage of grading is shown in Fig. 1.

Grading has a clear advantage in uniformity. If feed issues occur and there is no grading, there will be a big impact on the uniformity when the birds are on controlled feed.

The birds with lower appetites will be more affected than the fast eaters.

Puberty starts at 12 weeks. Pullets should reach the correct body conformation by 20 weeks of age. Females need to reach the fleshing targets at 16 weeks so that the correct amount of abdominal fat will be deposited at 20-21 weeks as shown in Table 1.

Birds should be graded again at 12 weeks to different carcase size. This can be done in three groups – small, average and big. The small carcase birds must be fed less in relation to the big ones to get the same conformation. 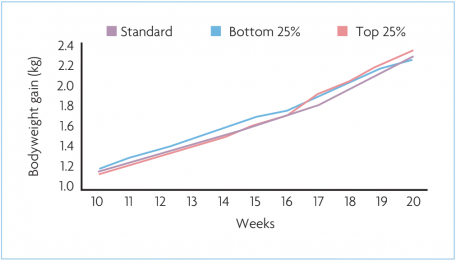 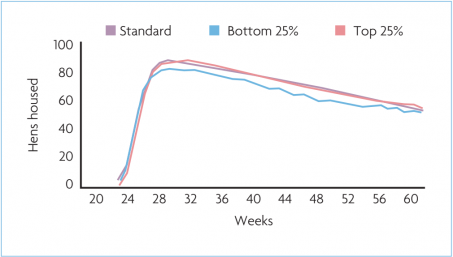 Evaluate the fleshing every two weeks and use this as a guide to feed more or less. Be sure that until 16 weeks the birds are well-controlled in condition with not too much over fleshing. Due to the innate high yielding ability, the birds develop breast meat fast when the nutrient intake is too high, especially in amino acids. Higher breast muscle means that more energy is required to maintain more breast meat.

For high production, females need some portion of body fat when lighting is turned up at onset of lay. During the maintenance period until 15 weeks, the birds develop their fleshing between score 2 and 3, scores 1 and 4 should be avoided. From 16-21 weeks, the fleshing has to increase to 3-4 so that the fat deposition will also begin in that period.

Between 21 and 22 weeks, the decision on lighting has to be made. All birds should have a fleshing condition between 3 and 4, and at least 90% should have good fat reserves on the pelvic bones before increasing light.

Modern broiler breeders are very feed efficient and need fewer nutrients to reach the same bodyweight at 20 weeks. In the first four weeks, the objective is for good initial growth where the organs and immunity are developing well. The chicks have to reach bodyweight targets with not more than 5% above target weight at four weeks.

Table 2. Increase in bodyweight gain and feed between 16-20 weeks.

Be aware that it takes two weeks before the given feed amount will be reflected in bodyweight gain. From five weeks up to 16 weeks, the bird’s growth must be controlled. Small feed increments are given in this period. Restricting nutrient intake will limit breast meat deposition and will enhance egg production.

To be sure all birds can eat at the same time, feed should be distributed in the dark in less than three minutes. The supply to the feeder lines should be fast so there are no gaps. The layout of the farm is important; the birds should be able to eat comfortably and avoid stress.

A feed space of 15cm is required after 12 weeks. In the maintenance period, it is very important to maintain carcase uniformity and not to let pullets become overweight. Pullets with a large carcase must be fed differently to achieve the same body conformation as birds with a smaller carcase.

The diet should always be wellbalanced to meets the bird’s requirements. For example, the first 10 weeks are very important for feather quality with particular demand for methionine and cysteine. With low feed intake, you must ensure that the bird’s intake of amino acids, vitamins and minerals is sufficient.

In the grower phase, lower energy diets may be used to give more volume of feed and increase feed time. It’s important to maintain the correct balance of nutrients in the feed.

Another option is to feed mash instead of crumble or pellets to increase feed time. This may not always be an option, for example with spin feeders.

From 16-20 weeks, the hormonal process starts and the birds have to accelerate growth and begin to deposit fat.

The bodyweight curve must be redrawn at 16 weeks if the females are overweight. They should maintain this excess weight at least to 20 weeks of age to get the appropriate amount of increase in body weight. In the period between 16-20 weeks, the females must grow at least 34%.

A third way to help increase the amount of fat is to feed a prebreeder ration with a higher energy level from 16 weeks onward.

The importance of bodyweight gain is illustrated in Fig. 2.

The bodyweight gain of the top 25% and bottom 25% is compared versus production curves.

The bottom flocks were heavier in the maintenance period until 16 weeks. Top flocks were below standard at 10 weeks but gradually increased to the standard.

From 16 weeks onward, the top flocks increased in bodyweight by 36.1% and bottom flocks by 27.6%. The bottom flocks tend to cross the standard line between 19 and 20 weeks.

Top flocks peaked on average at 86.8% and bottom flocks at 81.3% – a difference of 5.3%. Top flocks also have much better persistency.

A good investment in rearing will pay off in production. Today’s broiler breeders have excellent genetic potential.

Correct preparation is essential in rearing, which means high sexual uniformity, a bodyweight gain of >34% between 16 and 20 weeks, and correct fleshing and fat reserves at 20 weeks.